Govt urged to up agri spending 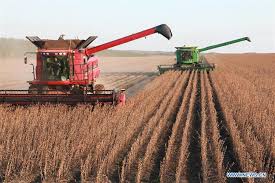 ISLAMABAD: Farmers on Wednesday staged a protest demonstration against delay in the Rs56 billion agriculture relief package to provide them subsidy on fertilisers, cotton seed, and pesticides amid the coronavirus pandemic.

The protest was organised by the Pakistan Kissan Ittehad (PKI) here outside the National Press Club.

The demonstration was attended by a number of farmers.

The protesters were holding placards and banners inscribed with slogans against the government.

The farmers demanded of the government to provide the Rs56 billion package.

President of PKI Khalid Mehmood Khokhar said that Rs56 billion agriculture package announced by the government had not yet been received by the farmers.

He also said that no significant amount had been allocated in the budget for agriculture sector at the federal level and at the level of Punjab province.

Khokhar demanded of the government that the agriculture consumers should be provided electricity at the rate of Rs5.35 per unit.

Protest is the constitutional right of every Pakistani but police have arrested 200 farmers last nigh, he said.

Khokhar condemned the arrest of farmers, and urged the government to release arrested people on an immediate basis.

Farmers were of the view that like the previous governments, agriculture is not on the top priority of the present government.

Due to the anti-agriculture polices of the government, Pakistan has been included in the list of countries, which import wheat, while in the past Pakistan was among the wheat exporting country.

Triple Is, a Private Limited Company is an addition to a galaxy of consultancy
providers for under-developed sector of economy – with a focus on rural masses
largely dependent on agriculture related activities.