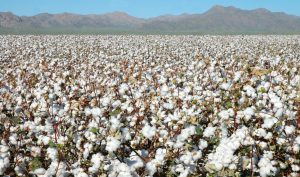 The summer precipitation was unpredictably long and intense, says Tariq Khan, technical director at the Ministry of National Food Security and Research’s Department of Plant Protection, attributing the invasion to unseasonal moisture caused by climate change.

“Moisture in the atmosphere, sandy soil and vegetation were perfect for the locusts,” explains Khan.

After three years of arid conditions, Umerkot saw pouring rains this season, recharging the wells and pushing up tall grass. Encouraged by the moistness of the soil, the villagers sowed their crops and were about to reap a bountiful harvest when the locusts struck.

A swarm (between 30—50 million locusts) can devour 200 tonnes of food in a day. They can also fly a distance of 150 kilometres to search for more food. Pakistan last saw locust attacks on this scale in 1993. “Once they have devoured the desert vegetation, they head for the crops,” says Khan.

“The air turns thick with these yellow-coloured insects so that the sky darkens even when the sun is blazing, it’s quite surreal,” says 40-year-old Akber Ali, a school teacher in village Viklokar, whose crop of cluster beans on three acres miraculously escaped the pests.

Being a rainfed region, the people cultivate crops only if it rains, says Zahid Bhurgari, general secretary of the Sindh Chamber of Agriculture, the biggest farmers’ organisation in Sindh province. He estimates that 5,000 acres of millet, moong (green gram) and sesame have been destroyed.

Khan has been following the pests since early this year, when the swarms were first sighted on the Yemen-Saudi Arabian border. “Because of the war in Yemen, no effort was made to control the swarms and they traversed Saudi Arabia and Iran to enter Pakistan in May. After destroying crops in Balochistan province they had hit Sindh by June,” he says.

“We need aerial spraying to stop the locusts from breeding and we need it done on a war footing,” says Bhurgari. “The locusts are laying eggs in uneven and high areas where sand dunes are inaccessible by ground vehicles.”

However, with just two aircrafts, a team of 14 people and seven vehicles, covering the whole of sprawling Sindh province is difficult.

According to FAO, Pakistan conducted campaigns to eradicate the pests at hopper stage and adult groups in the Cholistan, Nara and Tharparkar deserts last month covering 30,210 hectares, while the adjoining Indian state of Rajasthan did the same on hopper and adult groups, as well as on immature and mature swarms spraying control chemicals in over 84,639 hectares.

Locusts that remain undetected and uncontrolled will form adult groups and small swarms that could migrate in October and November to southwest Pakistan and southeast Iran, where rains are forecasted from October onwards. This would allow infestations to persist until temperatures warm up in the spring for breeding, according to FAO.

“I think the temperature inversions and shifting rainfall and vegetation patterns will make this a regular occurrence,” says Pervaiz Amir, agriculturalist and director of the Pakistan Water Partnership. He says the African agriculture sector faced similar challenges of droughts and locust attacks. “Without aerial spraying, the locust swarms may spread further.”

According to Bhurgari, a female grasshopper lays anywhere between 80—120 eggs in a day, and the hoppers turn into adults in just 20 days. “If the government does not take action now, these swarms will head towards the neighbouring districts of Mirpur Khas, Umerkot’s Kunri area and Badin, famous for mangoes, chilies and vegetables, and wheat, respectively. “You cannot imagine how big a disaster this will be if the locusts take flight towards that side.”

So far, says Khan, crop-loss has been “insignificant” and the major cash crop, cotton, has been saved. “We are continuing to monitor the crops and the movement of locusts. There is enough vegetation in the desert for the locusts to feed on — they attack crops only after wiping out the vegetation,” he says.

Babar Bajwa, regional director of the Centre for Agriculture and Bioscience International (CABI) for Central and West Asia, says there are environment-friendly solutions to control locusts but they have not yet been tried out in Pakistan. “Being a science-based organisation, we are very careful that any new technology developed must be tried, tested, and verified in a limited area before it is adapted for the entire area. We do not want to cause more harm to the environment in order to eliminate one pest.”

Bajwa says “green” approaches take time, unlike the government’s “piecemeal” approach to solve the problem immediately. “I am satisfied with the vigilance of the government department, otherwise this problem could well have gone out of control.