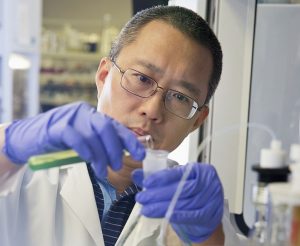 Pakistan, as an agricultural country can manufacture and utilize biochar-based fertilizer by using the straw biomass as a raw material to further enhance its agriculture production and protect environment, a Chinese soil scientist said.

Biochar-based fertilizer is currently being manufactured in China, where straw is carbonized and then mixed with fertilizers, Dr Genxing Pan, Nanjing Agricultural University told a delegation of Chinese and foreign media outlets who recently visited a straw biomass utilization project in Ulanhot, a city of China’s Inner Mongolia Autonomous Region, and gained a general understanding of biochar fertilizer manufacturing process and experienced the magic of how straws of corn and other crops were turned into fertilizer and other by-products.

Explaining the mechanism of biochar and biochar-based fertilizer, he said, in this way, straw is returned to the field and recycled, which effectively avoids air pollution caused by straw burning in open fields, and helps improve air quality in the project areas.

Dr Genxing Pan, a soil scientist, and director at Institute of Resources, Environment and Ecosystem of the University said that biochar-based fertilizers have attracted increased attention because biochar can improve the soil fertility, promote plant growth and crop yield.

The regional countries especially Pakistan, which is also an agricultural country can benefit from the straw biomass utilization to further improve its agricultural produce especially rice.

He opined that the use of biochar based fertilizers can also alleviate problems of soil hardening and reduce the damage caused by chemical fertilizers and thus increase the yield of farmland.

“Biochar based fertilizer enhances nutrition and it has a huge potential to boost global food production and save land and environment besides feeding the increasing population,” he said.

Dr Genxing Pan shared that he has visited Pakistan and delivered a lecture in Faisalabad on the use of straw biomass utilization and its positive impact on the soil and environment.

According to Karen Lane, Principal Communications Specialist, ADB, Department of Communication based in Manila who also accompanied the media delegation during the visit informed that the two such projects, financed by Asian Development Bank (ADB) are under construction and scheduled to be in operation in the early part of next year.

Located in Jalaid Banner, Inner Mongolia Autonomous Region and in Kangping County in Liaoning Province, each project has received loans of 150 million yuan. The capacity of both projects is about 30,000 tons.

She said the ADB is lending support to China to reduce carbon and shift to the green economy as it is good for the region and the world.

Zhou Yun, Senior Environment Specialist, and Project Officer, ADB East Asia Department opined that regional countries can learn from the experience of China and introduce this fertilizer in addition to chemical and other conventional fertilizers.

She remarked that biochar fertilizer being more friendly to soil can help reduce air pollution and enhance agriculture production.

Walking into the particle storehouse of the project set up in a suburban area, the journalists could see big bags full of straw pellets manufactured at another factory set up outside of the city.

At carbonization workshop, Xiaodong Guo, deputy manager, briefed the delegation about the plant, its production capacity, and the fertilizer manufacturing process.

The plant, designed and manufactured in China, turns the straw pellets into fertilizer by cooking the material from 400 to 500-degree centigrade. No waste or carbon dioxide emissions are produced throughout the whole process.

During the visit to particle plant in Xinfu village where trucks were unloading straws brought from the nearby fields, Bao Tianxi, owner of the plant briefed that these straw are collected from fields in the form of bales and densified into pellets and then transported to the fertilizer manufacturing plant.

“I purchase straw from 400 local farmers and the production of the plant is around 100 tons per day during the harvest season,” he added.

The farmers of this area usually utilize biochar fertilizer for their crops as it is available for them on a 20 percent discount.

The owner said that before setting up this plant, his annual income was around 100,000 yuan but last year, his net profit was three million yuan.

Some farmers present in the areas informed the delegation that this fertilizer is becoming popular because of its benefits and its market demand is increasing day by day.

Although, the cost of the fertilizer is high as compared to the chemical fertilizers but we are switching to it because it is environment-friendly and useful for the soil besides helpful to enhance per acre yield, they added.