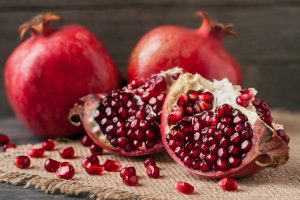 two pomegranate on the old wooden board with sackcloth.

The farmers who received training said that professional growing techniques and crop protection have positive effects on products.

Balkh agricultural officials said Saturday that the pomegranates yield has increased by 40 percent in the province.

He said this quantity was exported to India, Pakistan, UAE and other countries.

Zobin said that farmers cultivated pomegranates on 3,600 hectares of land in Khalm district of Balkh province.

“We have registered that our farmers have earned 400,000 Afs from an acre of land,” Zobin said.

Mohammad Ishaq,a farmer in Khalm district of Balkh said that he gained more than 4,200 kg of pomegranates from an acre of land.

The farmers who received training said that professional growing techniques and crop protection have positive effects on products.

“We have three problems: one of them is water, another is disease, and the third one is that we don’t have cold storage. Our pomegranates are now sold 7kg at 100 Afs but in the spring the price increases up to 700 Afs,” said Mohammad Sarwar, a gardener.

Provincial agricultural officials admit that lack of cold storage is the main problem but added that efforts are under way to overcome this problem.

“The ministry of agriculture made seven cold storage areas for farmers of Khalm district of Balkh Province and put them into use,” said Balkh Agriculture Director Zabihullah Zobin.

According to officials, Tashkurgan village of Khalm district has the most pomegranates—they are famous internationally—and most of them are sold in domestic markets and some are exported to India, Pakistan and Uzbekistan.