The battle for Pakistan’s farms 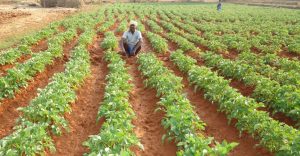 Good’ opportunities exist in Pakistan for US investors, so sayeth USDA agriculture counsellor Rey Santella, as reported by this newspaper yesterday. Apparently, there is a big a potential for expanding trade and investment ties in agriculture sector between the two countries. Trade, perhaps yes; investment perhaps not so much.

According to data by State Bank of Pakistan, gross inflow in Pakistan’s agriculture, forestry and fishing sector was about $93 million since FY15 to date. That’s about 0.6 percent of the total gross FDI inflow in the same period.

Data under ISIC-4 structure, under which economic activities are subdivided in a hierarchical, four-level structure of mutually exclusive categories to inter alia facilitate data collection, is not available on SBP’s website for years before FY15. But there is plenty of reliable anecdotal evidence available that Pakistan has not been able to attract FDI in farming sector, despite all this “potential”.

Likewise, investments from the US have also been rather poor of late. Gross inflow from the US in FY15 to-date, stood at a mere 6 percent of the total gross FDI inflows in the country in this period. Which is why it is safe to argue that the avenue through which the US sees a lot of potential in the country’s agriculture sector is ‘trade’ not ‘investment’.

The US is the world’s largest exporter of farming products, followed by the Netherlands. And both are actively seeking to tap Pakistan’s market. If the Australians had a field day catching the early worm in Pakistan’s exotic dairy cattle market, the Dutch and Americans are trying to gain share in the bovine semen and embryo segment and also perhaps ride the next wave of exotic cattle. Likewise, if the US has a big share in Pakistan’s soybean market, then the Dutch and other Europeans are trying to capture dairy equipment and crop equipment such as harvesting machines.

Pakistan farming sector is yet to develop; there is no arguing about that. Anyone who doubts this, should take a look at the picture, taken at a museum in a small town called Giethoorn in The Netherlands. The picture shows a vessel that the Dutch used for milk distribution a hundred years ago, whereas it is still ubiquitous in Pakistan in the 21st century.

Even if Pakistan decides to develop its farming sector, it will take ages, because farming is far more intricately connected with every other farm produce, human nutrition, climate, and so many other things, than any other aspect of economy. This is unlike box standard trade, exchange rate or industrial policy, that every other armchair economist can do; farming is actual science.

Bear in mind that Pakistan’s top talent is not going into farming; the agriculture universities’ syllabus is outdated (even in the case of dairy sector where big corporates exist); think tanks don’t have farming on their agenda, nor does media (except perhaps when tomato hurts urban wallets) cover farming. Classic stepchild treatment.

And since Pakistan doesn’t have the capacity to make agriculture policy, guess who will develop it for her: the donors. And who are the biggest and most active donors: the US. And will they invest in a sector that doesn’t have its policies right, in a country where farming is governed independently by each province (since 18th amendment) and is yet dependent on Islamabad’s policies on variety of topics such as trade tariffs and GMO. Not quite likely; trade is their low hanging fruit.

Ergo, expect both the US and Netherlands to try influence agricultural development in their favour such that their produce gets to be imported by Pakistan the most. Meanwhile, China is also interested in Pakistan’s agriculture produce; agriculture is still one of the six pillars of CPEC in case anyone has forgotten that. Let the battle for Pakistan’s farmland begin!