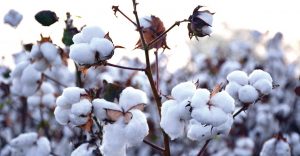 The prices of cotton decrease by Rs 150 to Rs 300 per maund. According to the estimates of Advisor on Commerce and Textiles Abdul Razak Dawood eighty lac bales of cotton will be produced. Import of cotton exceed by 35 lac bales. This year the import of cotton bales is biggest in the history of Pakistan and textiles.

In the local cotton market during the last week cautious buying was seen by textile and spinning mills while due to panic buying by the ginners over all bearish trends was seen in the market. The rate of cotton decreased by Rs 100 to Rs 300 per maund while the rate of good quality cotton witnessed a decrease of Rs 100 to Rs 150 per maund. The rate of low quality, cotton decreased by Rs 200 to Rs 300 per maund. Over all the quality of all kind of cotton is below the level. Some textile mills were involved in limited buying. Despite lowest production of cotton in the history of country the buying by the mills were very slow the trading volume was very low.

This year the prices of cotton are high as compared to last year as well as the quality of cotton is also low due to which the buying of cotton was low otherwise generally, in these days buying of cotton was at its peak. Due to imposition of 10% sales tax on cotton, 7% sales tax on yarn and increase in the interest rate by the banks the textile mills are hesitant to stock the cotton. On the other hand the big textile groups who had the facility of tax free DTRE were importing cotton in sufficient quantity from abroad.

According to the importers up till now agreements for the import of 35 lac bales has been signed. According to the sources of All Pakistan Textile Mills Association (APTMA) mills had to import 60 lac bales to fulfill their needs of worth 1.75 billion dollars. The economy of the country had to bear the burden of import bill.

The Spot Rate Committee of Karachi Cotton Association stabled the rate of cotton at Rs 9000 per maund .

Chairman Karachi Cotton Brokers Forum Naseem Usman told that mixed trend was seen in the international market. The news of decreasing tension between the America and China trade war is the reason of increasing price of New York Cotton Market. According to the weekly export report of USDA despite increasing the export of cotton by 24% the rate of cotton decrease on the last day while the tension between America and China increases due to the Hong Kong issue.

The fluctuation was routine in the rate of Chinese cotton market while the downward trend continued in the prices of cotton in India because the reason is that it is expected that production of cotton will increase. The textile sector in India is in depression. Moreover, Pakistan is importing cotton from India in large quantity but due to ban on trade between the two countries this year up till now a large quantity of stock is present. Some importers had requested the government to resume trade with India but the government instead of accepting the request gave proposal to the importers that they should focus on strengthening trade ties with China.

The organizations especially in the business of making textile products have requested the government to solve their longstanding demand of releasing amount of sales tax refund and insisted to solve other issues.

APTMA is demanding from the government to withdraw import duty on cotton. Both important organizations demanded that cost of power should be reduced to increase the exports. During the last three weeks APTMA leadership met several times with chairman FBR and Prime Ministers advisor on Commerce and textile Abdul Razak Dawood several times despite of that issues are not solved. According to the information Razak Dawood is insisting on restoring zero rated facility to five export oriented sectors other than textile. On last Friday while addressing the textile and Commerce committee of National Assembly Dawood said that it is expected that this year 80 lac bales of cotton will be produced in the country which is 70 lac bales less than the earlier estimate of one crore 50 lac bales. Moreover farmers are requesting to the relevant departments that good quality seeds and pesticides should be arranged before the next season so that cotton production should be increased. They were of the view that for the availability of good quality seeds Chinese agricultural experts and scientists should be consulted. Few days back Chinese experts visited Islamabad and gave suggestions for increasing agriculture production. The meeting was attended by agricultural experts from across the country.

Moreover, on Friday chairman APTMA Amanullah Kassim Machyara and Group Leader APTMA Gohar Ejaz addressed a press conference in order to highlight the issues faced by textile mills. They especially appealed the government to reduce the power tariff for textile sector. They said that a delegation of APTMA would go to Islamabad to hold meetings with concerned authorities on Monday December 2nd and shared their concerns with them.