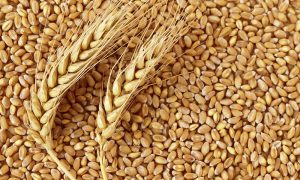 U.S. wheat futures dropped for a third straight session on Wednesday as pressure from ample global supplies pushed prices to a nine-day low.

Wheat came under pressure amid ample global supplies, despite concerns about dwindling production in Australia.

In its weekly crop progress report on Monday afternoon, the U.S. Department of Agriculture said 89% of U.S. corn was harvested, up just 5 percentage points from a week earlier and compared with the five-year average of 98%.

Brazil’s 2019/2020 soybean crop, in the final phase of planting, could reach a record 122.7 million tonnes, according to the average forecast in a Reuters survey with 16 market analysts, which would be up 6.7% from the government’s estimate for the previous season.