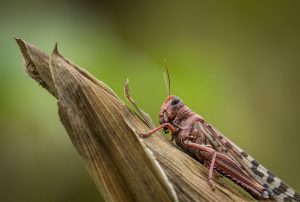 The rapidly increasing locust attacks have made agriculture sector stakeholders highly perturbed as they feel federal and provincial governments are still not active enough to tackle the insect.

They lament that these governments have not allocated sufficient funds in federal and provincial budgets announced recently.

Many term locust swarms – which have so far destroyed crops in 54 districts of the country – a much more serious threat than the Covid-19 pandemic since the former may cause commotion in terms of food security.

Covid-19 can be avoided by maintaining social distance and following SOPs, but there is no escape from the financial crisis and hunger caused by locust attacks,” remarked Shahzad Ali Malik, Chief Executive Officer of Guard Agriculture Research and Services Private Limited.

“Locust is a bigger threat than Covid-19 for Pakistan and it should be taken more seriously.”

Pakistan is suffering the second locust attack in a year and so far the insect has destroyed crops over millions of acres. According to farmers, wheat, pulses, oilseed, fodder, vegetable and mango crops have been damaged by the locust. The third locust attack is expected in southern Punjab during the upcoming monsoon season.

According to the government departments concerned, they along with Provincial Disaster Management Authorities are tackling the issue on war footings and funds have been earmarked in the FY21 budget for complete elimination of locusts and supporting agriculture sector.

As per budget numbers, the federal government has allocated Rs10 billion for agriculture, the Punjab government has earmarked Rs31.73 billion and Sindh has set aside Rs14.8 billion.

However, for the agriculture sector stakeholders, these numbers are not impressive. They argue the funds are insufficient which will not help resolve the structural issues and promote research for value addition in exportable commodities. These will not support the country in purchasing modern equipment for the agriculture sector, which contributes around 20% to the country’s gross domestic product (GDP) and employs more than 50% of the workforce.

Talking about the equipment needed, Malik said, “We need to acquire a large fleet of aircraft on lease from other countries or the army as a stopgap arrangement. However, in the long run, we need to equip the Department of Plant Protection (DPP) with modern technology so that it can be able to undertake aerial sprays.”

The DPP had more than 20 aerial-spray aircraft in the early 1980s but now it is left with only one. Lahore Chamber of Commerce and Industry (LCCI) Senior Vice President Ali Hussam Asghar said two major crops – cotton and rice – would be affected badly and the latter would be in flowering stage by July in Sindh and southern Punjab, when the next locust attack was feared to hit the country.

“These two crops are a source of foreign exchange and paddy alone contributes almost $2.2 billion annually to the national exchequer,” he told The Express Tribune.

Asghar, who also serves as vice president of the Rice Exporters Association of Pakistan, said cotton production was likely to remain around nine million bales against the target of 15 million bales this season.

“Locusts are an urgent issue, nonetheless, there are some other issues as well, which need to be addressed to increase the paddy crop size. There is a need to promote seeds produced by the private sector as the Punjab Seed Council is not promoting its seed varieties,” he said.